Sunday, 20th March 2022 we received news that our dear friend, Jacob Oulanyah L’Okori, a genuinely warm individual, a loving father, a leader and a friend of many passed on. While I mourn the loss of a friend, I also pay tribute and celebrate a life that was well-lived.

So who is Jacob Oulanyah L’ Okori (JOL)? I am sure that we all have our own answers to this question. To me, this is what, JOL or Yakobo was.

Jacob was a just man not only in his work at the Parliament of Uganda but in many of his dealings. Despite his commanding presence and executive gravitas, he was never loud about the good things he did for very many people. On a personal level, Jacob was exceptionally generous to me with opportunities, time, friendship and hospitality.

After enrolment, a top law firm gave me an opportunity to work as an Associate. The prestige was very appealing but the salary proposition of 200,000/= per month was not attractive. I set out to look for a law firm that would give me a better opportunity to earn something commensurate with my papers. I then approached his partner Dr. Onoria who was practising with him.  He referred me to JOL and in meeting with him, I requested that I be allowed to be a Legal Associate but with a management role. I wanted to work for a commission and not for a monthly salary. Surprisingly, he allowed and we worked together under that arrangement for some time with his full trust.

This experience was very important as it empowered me to effectively run and manage my own law firm much later. Even after leaving the firm, he freely shared opportunities.  In one of his last meetings with me, he summoned me to his home and we sat upstairs and chatted at length. He told me that one of his friends in UAE had wanted to purchase a Bank in Uganda and that since he was busy, he had wanted to travel with me so that I handle the instruction. He always did this without expectation of any return. This was a continuation of many opportunities that he freely shared.

He was an astute legal professional. He was a prolific draftsman, law teacher, litigator and a legal aid promoter. He carried these attributes to Parliament and little wonder that in his first term in Parliament, he was elected as the Chairperson of the Legal & Parliamentary Affairs Committee. He worked very strategically to formulate some of the key laws in this country. I worked with him together with Mrs Ndawula Margaret as his Researcher during the time when the current Copyright and Neighbouring Rights Act was a Private Member’s Bill. Today, this law is being widely applied to protect intellectual property rights of many stakeholders. It owes its existence to Jacob.

He was the key architect of having the Administration of Judiciary Bill passed. He supported the process initiated by the Centre For Public Interest Law (CEPIL) through Hon. Felix Okot Ogong to have this processed as a Private Member’s Bill before it was taken over by the Executive upon making assurances that they would table the Bill. He kept following the Bill processing until it was finally tabled and passed. Today, this law is playing a critical role in facilitating the Judiciary with the required resources to effectively execute its constitutional mandate.

Jacob was a man of deep conviction in what he believed in. Whenever he took a stand, he did so with precision, utmost loyalty and dedication. Once he made a decision to support or give his backing to a particular cause or purpose, you would never have to second guess his commitment to it. When he was UPC he was UPC 100% and when he joined NRM, he was NRM 100%. I believe it is his loyalty trait that accounted for the quick trust and confidence reposed in him by the NRM party.

In addition, Jacob had an outgoing personality, sense of humour and unexpected boundless talent in many things. I shared with him a love for bow ties. Every time we met up, however serious the occasion was, he always quietly whispered a question in my ears “Between, us who wore it better?” I would look at his and look at mine and on most occasions, he won the bow tie contest. Whenever I declared him the winner, he would burst out in his trademark unique laugh before we proceeded with the business at hand.

Lastly, Jacob was bold. Whether when he was representing indigent prisoners like Candida Lakony or while serving as a lawyer, he was always bold. Speaking truth to power was normal to him. While serving as the President of the Uganda Law Society, I always engaged him on rule of law issues. In many cases, he managed to convince the Executive to drop certain provisions that threatened the rule of law. For instance, I know for sure that he was very instrumental in providing legal alternatives to the Executive that led to the withdrawal of the Constitution Amendment Bill related to compulsory acquisition of property.

Not many leave behind a legacy of such consistent dedication and accomplishment. As lawyers, the best way to remember Jacob is to conduct ourselves not only in a noble and distinguished manner that upholds the dignity of the Bar and Bench, but also to preserve, protect and defend the Constitution and the rights of Ugandans.

This season is particularly a difficult and painful time for his family. I extend my heartfelt condolences to them, as they not only have to contend with the loss of Yakobo, but also deal with unnecessary negative and callous publicity. To the family, JOL would ignore the rumblings and deal with the main issues. Perhaps the greatest lesson from all this, is the stunning indictment to all our leaders, that the Nation Project called Uganda still needs a lot of work by all of us to make it better. Thankfully, JOL did his part by always reminding us of the solution to this: the African philosophy of the concept “Ubuntu” “I am because we are.”

To the family, I pray for God to give you the courage to ignore the distraction and focus on celebrating the fond memories of the man your dad was.

Life can be fleeting. But in all of it, the Lord reigns. Yakobo, Wodma, Wodlyec. You have run the good race.

You will always be missed. Rest In Peace Till we meet. 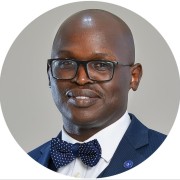 Reflecting on The 10 commandments of Egoless programming.

Ugandan Rugby Clubs as Patrons in a Bar