Last Sunday but one, which was also Easter Sunday, all of the heathens wore their best clothes and headed to the Museum for Uganda’s third Blankets and Wine event.  Whether or not they went to church first is of no consequence. Easter is the biggest Sabbath, only supposed to be spent eating dead animals with family and watching the Jesus movie, right?

Blankets and wine is staged somewhere in Africa every first Sunday of every month and has been in operation for five years now. Muthoni Ndonga, also known as Muthoni the Drummer Queen, is its CEO and founder. As a fan, I become excited in a new way whenever I see her. Because of the success the event has achieved, she was constantly surrounded by video cameras and earnest journalists, all waiting for their chance to get a question in. She looked rather interesting (and a bit scary) in black leather tights, a peplum top and some shit-kicking boots. The red mound of hair that was  perched on the top of her scalp looked like a rooster’s comb.

The principle of blankets and wine is a simple one. A large, grassy venue is selected, a stage is set up and an African musician (or two) is invited to entertain the attendees. People pay 35,000 for a ticket before the day of the event and 50,000 at the gate.

They drive, walk and take boda bodas to the venue carrying with them heavy baskets of food, wine and other delicious intoxicants.  Blankets and wine is the perfect antidote to that vicious brand of boredom that attacks on Sunday afternoons.

I applaud the organisers for setting up at the Museum. Kyadondo (Where B&W was held the last time) has boggy grass and a perpetual smell of sewerage. It is especially disturbing when rain falls.

Everything kicked off quite late, even by Ugandan standards. By 4 pm  people were just beginning to settle down. Even though there had been a huge downpour the night before, it was pleasant to find that the grass was nicely dry and compact, making it possible for those who had forgotten their lesus and blankets to set up base on the grass itself.

The stars of the day were daughter of the soil Tamba and Madtraxx from Kenya. I’d attended the Qwela concert two days before, where Tamba performed that delightful song of hers, Kampala. My appetite for her music had been whetted and I was looking forward to her performance.

I am sad to report that it was disappointing.

There is no doubt that Tamba has a good voice. She sounds like fairies on butterfly wings. But her performance! She was so lackluster at Blankets and Wine. Lady barely made use of the stage and it felt like she knew the crowd wasn’t feeling her. One very awkward moment was when she asked the crowd to get up and dance, “Or else I won’t perform this song the next time you ask for it!” It was clear she was joking, but I wish she had shown more confidence. Five delightful children ran to the space below the stage and danced for her, so that was something.

Blankets and wine has become that event that all of Kampala’s cool kids flock to, to see and be seen. People make a serious effort to look nice, breezy and fashionable so if you love to watch people (and then vibe them), you shouldn’t miss the next one.

Tusker had a big presence at the event and everybody who paid for a ticket was handed a coupon for a beer. That was a good marketing stunt. How awesome would it be if a cupcake company became inspired by Tusker’s generosity and started to hand cupcakes out to revellers at the next B&W? Massively awesome.

There were tents selling food but most people had come with so much to eat that their hands didn’t stop travelling to their mouths for all the three hours that things lasted.

Life was restored to the bloated crowd when Madtraxx hit the stage. The man’s performance style is as big as he is. From the get go, people were electrified. They stood up to dance and didn’t stop even when he began singing songs that they didn’t know.

People wriggled and boogied until 7 pm when the skies yawned and let some very angry rain out. As usual, people scattered as if they were in danger of dissolving.

My friends and I weren’t about to sit for an hour in some bar because of water from the sky, so using our mat as a kind of umbrella, we waddled like ducklings  from the museum to the taxi stage.

Blankets and wine was so much fun and if it were to happen every Sunday, I have no doubt that people would attend in large numbers.

Apenyo is a writer and a lover of most kinds of silliness. When she’s not stringing words together, she’s either reading or dancing. You can find more of her at <a href=”http://apenyo.wordpress.com” target=”_blank” rel=”noopener”>apenyo.wordpress.com</a>. 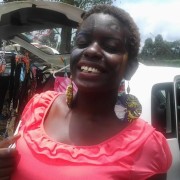 Mildred Apenyo
Apenyo is a writer and a lover of most kinds of silliness. When she’s not stringing words together, she’s either reading or dancing. You can find more of her via her blog. As you may or may not know, She is participating in a writing competition called writivism. Click here to go to her page on their website . And this is a video they made of her speaking about why she writes
Previous

Meet Mike Merrill, The Man Who Sold His Fate for $1 a Share.