When you’re seven and Jadwong tells you, “Galamira wansi!” you do as you’re told. You drop to the floor like a Mvule tree felled with the axe. Wherever you may be, stay down. Play dead or else things won’t end well. Brace yourself as a smoke-stained man-sized hand claps some sense into ‘that stupid head of yours.’ Steal a few gasps of air as he swigs on some of that zombie liquor and then brace yourself again as more sense is knocked into you. Count the seconds as the grandfather clock casually leaning against the peeling wall ticks away into the stillness of the night. It’ll be all over soon. Zombie mode any moment from now and then he won’t be able to hurt you anymore, verbally, physically or otherwise.

When your drunken father orders you: “Sooka ogende ondeetere omuggo!” you better hit the ground running. You better get a sturdy cane that won’t snap and break lest the next thing to break will be your ribs and your thick head. You don’t need to be seven to know that boots and fists can break bones faster than a cane and not even your mum will come to your aid. She’ll only break your heart, locked in her room praying for Jesus to come and save her children. She’s terrified enough as it is. Your brother and sisters are even more terrified, crammed into their tiny beds feigning sleep. What they don’t know is there won’t be any saving tonight.

And a stick won’t pick itself.

Get a cane that won’t deteriorate into splinters that might stab into your tender flesh in a moment of blind rage. You’re not seven; you don’t know the rage of a drunken father with a broken cane; with a lot of pent up frustration and a seven year old mirror image of his young self staring back at him in stark terror.

Pray you never find yourself out during a particularly nasty storm with thick heavy raindrops roaring furiously as they collide head-on with the corrugated iron sheets. You won’t even hear yourself howl in pain as Jadwong repeatedly dents your skull with a yellow Tumpeco jug in the process of giving you a late-night punishment shower. Worse still is that you won’t even feel the tears and the blood running down your face. The cursed rain simply washes away your hard-earned evidence. At least the bitter cold burrowing into your fragile bones will numb the blows when they come for come they will right after Jadwong sucks the life out of his Sportsman cigarette. That’s any moment from now.

Mummy told me to pray that Jesus would come down from heaven and save us. I looked again at the grandfather clock and the second hand just ticks on in the aftermath. Jadwong has left to go waste himself some more and Jesus hasn’t yet come to save us. For someone Mummy says is the Son of God, I don’t think his daddy taught him well to keep time. I wouldn’t have this swollen red eye or this cracked lip. My head wouldn’t feel like it has a heartbeat too.

Last night, Jadwong came home in a good mood. He came bearing gifts but to claim them, we had to each give him a hug to welcome him home. When it was my turn, he sat me on his lap and enveloped me in a bear hug, prickly beard and all, the likes he only gives when he’s scared he’s punished me too hard.

It seems like Jesus came at last to save us and took my father’s form. He brought bread from Master Bakers and Jam to go with it. He brought matooke and meat, and rice for us kids. ‘Tulya omuceere ng’obunyonyi,’ he’s fond of telling us—we feast on rice like chickens.

He didn’t notice the dirt under my fingernails. He didn’t ask for the remote when it was time for news on UTV but instead let us continue watching Wild Rose on TV Africa. His eyes were clear and warm with crow’s feet which means he felt amused by our tentative movements around him. There was no beer that night. There was no slurred repetitive zombie talk and no smoking monster to send me out into the night to fetch a cane. He instead let us have second and third helpings until our tummies were stretched like drums.

Mummy was right when she told me to pray. Jesus came to save us and he came in style. I am seven years old and God’s Son listens to me. I try not to think about him dying though. I quickly push it out of my mind.

I’ll be sad when Jesus has to leave again and Jadwong returns. We’ll have to call him Yaamo again and scamper off for cover when we hear his zombie talk and heavy footsteps announcing his arrival.

We’ll have to be as quiet as possible and eat as little as possible and be clean as only Omo detergent can make us. Then maybe he won’t notice we share a roof and he won’t get mad and bark at us. Then maybe he’ll have to leave and Jesus returns. Jesus will make new mummy’s promise that we’ll be alright, that we’ll be safe and happy with enough to eat.

I can’t wait for Jesus to come again. 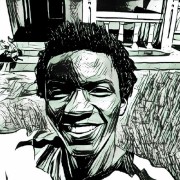 Sydney Mugerwa
Sydney Mugerwa was a peculiar child. He was born without his permission, but everybody assumed he would naturally jump on board. Catastrophic mistake. He is a word-munching troll at odds with reality. He is a man now—a Ugandan man with a mythical beard. Stand in line and say hello.
Previous