Growing up, I have always known people from Uganda’s central region to be noticeably polite. Their greeting stretches beyond you and your family to extended relatives, crops and livestock. At least the exaggerated version does. Nonetheless they exude respect and thus one is inclined to accord it to them.

It is attributed to the way they are brought up as children but of course, one needs to make a decision to maintain this even in adulthood. I know people like this but most of them are of the ‘older’ generation. It is rare to find a teen, for example, going out of their way to be polite to a stranger without being prompted.

I have noticed this before, obviously, but it is my boda boda escapades that have opened my eyes more to the decline of simple courtesy in our society. I will illustrate below.

Out of 5 boda bodas that I use, 4 of the riders exclaim when I greet them or show interest in their lives. Their reaction often sparks interest and conversation. Today’s was no different.

I approached a ‘boda boda rider’ across the street from Oasis Mall. I asked him to take me to Nakasero hospital and we took time debating over the amount I should pay. I ‘won’ this round and hopped onto the bike for what was to be an interesting ride.

I greeted him ‘again’ as soon as I was comfortable and we headed to our destination. ‘In an entire year,I am greeted by about two female clients,’ was his opening remark (said in Luganda).

“Stop exaggerating!” I quickly interjected. Turns out he had his armour ready. He explained that most clients come and simply yell instructions. They forget that you are a human beings too and haven’t the courtesy to say hello at least.

It seemed he needed to let out steam so I mostly grinned and nodded (as if face to face conversation). He added that the world is bent on ‘ speaking with money’  thereby rendering the common man invisible. This saddened my heart and I could totally understand, at a different level of course.

Despite having a reasonable education, I have also been treated like a child or second class citizen for one reason or another. I wish there was more time for me to explain that in detail. Thankfully, there was humour yet to come 🙂

He asked me if I was married and I told him I wasn’t. He smiled and assured me it was his lucky day. Two single people under this evening sky? Why not just couple up? I laughed hysterically but he wasn’t done yet. He said we could go for HIV testing immediately.

Two points to note; unlike most ‘proposals’ of this nature I have received, his main concern wasn’t money or status in society but HIV status! Next, he spoke like we were already making arrangements for our new ‘bond.’ I was amused! I conveniently switched conversation to the friend I was visiting who was yet to give birth. He told me he would love to see my baby (babies) and I assured him that God’s timing would determine that. “I understand. You are probably at university, first complete and then start thinking about that,” he replied.

Yaay me! I look that young 🙂

It was at this moment I realised we were at the Nakasero hospital gate. I paid and wished him well. I prefer not to get their contacts so that I keep these escapades untainted by familiarity that often ruins relationships.

Does anyone else have any interesting boda boda anecdotes? Be so kind as to share in the comments. 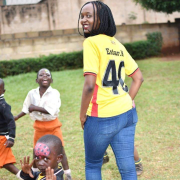