Note: All photographs in this article are by Ugandan documentary photographer, Jjumba Martin. You can read more about him here.

Four years ago, the place that is now Okere City was a bush far removed from the nearest homestead. It was a place where no one ever considered living. Local tales abound of the place previously being a habitat for ghosts and other evil spirits. While this sounds – and probably is – farfetched, it is a thing that many members of the community believe and it speaks to the place’s earlier inhabitability.

Now, the approximately 500 acres on which Okere City sits, is a vibrant space that echoes with the laughter of healthy, little children. A single large pathway separates the ‘city’ into two main areas. On the lower end are the adult school, restaurant, grocery store, community hall, community recreation center, clinic, village bank, and Shea butter storage house. On the upper side, are residences, guest houses, the primary school and farmhouses all constructed with locally sourced materials. Excluding the residences built with brick and mortar, all the other structures are built with thatch and bamboo and all bear a unique architectural print.

The founder of Okere City, Ojok Okello (right) with a visitor, on a tour of the guest houses

Located in the Lango sub-region of Uganda’s northern region, about 400 kilometers (248 miles) from Uganda’s capital Kampala, Okere City the ‘thing’ is easy to see and appreciate. It is a rural community with housing, social and recreational services, built with local materials, powered with solar power and watered with underground water sourced from boreholes. It is that simple- yet the existence of an establishment like this and how it came to be, is quite hard to wrap the mind around. To understand the magnitude of Okere City, one has to appreciate the difficulty in establishing a single development project, let alone several at ago and winning community ownership of each and every one of them.

In describing the concept, words like “radical” and “ambitious” have been used and for good reason: Okere city is set out on a journey to build the first sustainable city in Africa. For an establishment that is hardly three years old, it sure is on a sprint. With a school here, a bank there, a clinic here and a market there, it seems too good to be true, except that it is true – and in there is the existential crisis of the people who experience it. Okere city defies seemingly insurmountable odds. With this, the question of whether it is real or not immediately leaves the stage for the question, “How is this even possible?”

This is how: A community comes together and marks off an area which they demarcate; and in this area, the community builds a primary school, a school for adult learners, a market, a bank, a grocery store, a health center, a farm, a forest, a playground, gardens, farms, a restaurant and a recreation center. As earlier mentioned, the city is powered by solar energy and watered by underground water pumped from boreholes within the community.

Now every city does good to have a key resource that gives it some kind of power – its ‘vibranium’, so to speak. It is a term that Okere city’s principal vision bearer, Ojok Okello, has used in his 2019 TEDx talk held at the International University of East Africa. For Okere city, it is the shea tree. The shea tree that produces the shea nut from which shea butter, one of the most sought after cosmetic ingredients worldwide, is made. The shea tree is to Okere City what vibranium is to Wakanda.

In its organization and functioning, there is no clearly defined boundary between where Okere City begins and where the man Ojok Okello ends. This is because Okere City is in practice and indeed, a community organization which, while started by Ojok and sustained in many ways by him, does not belong to him personally, rather to the community of the people of Okere. Ojok Okello has personally made sure of that, actively establishing himself and his family as a part of, and not owners of Okere City. He has divorced himself from the conventional rules of ownership pursuant to creation and articulated unequivocally that what is Okere City, belongs to the community of Okere. In this way, the organization has set itself right from the foundation as fundamentally anti-establishment- laying no personal claim to its founder’s contributions, rather considering his contribution to Okere City as unique own, in the very same way that the other members of the community have contributed to Okere City in their own unique way.

If it has not yet become apparent by this point in this article, the cost of building and running the city is largely on Ojok Okello personally but he gets the occasional support from friends, partners and well-wishers of Okere City. It is this fact that tunes out the glamour of Okere city long enough to allow for consideration of the huge undertaking that Ojok Okello has set himself on. Suddenly the thanklessness of it, the weight of sacrifice he is making, and the fact that he gains absolutely nothing financially from it and probably never will, become apparent.

In truth, Okere City takes from him way more than he gains from it and of this he is aware. When asked how long it would take before Okere City would be self-sustaining, and not requiring his own personal financial resource investment, Ojok Okello does not skip a bit when he answers, “Not in my lifetime.” Yet leadership is hardly about what one gets from it. Like leaders before and those who will come after him, it is not that they necessarily enjoy it, even though some enjoyment may be derived from it, it is that they could not live with themselves if they did not do what they are doing- in Ojok’s case- building Okere City.

A group of young people watching a musical performance in Okere city. These events attract large numbers of people from the community

Curiously, in Ojok’s cozy office-cum-library, there hangs near the window alongside several license certificates for Okere City’s many activities, a photograph of American civil rights activist Martin Luther King in a pensive mood with the quote: ‘Life’s most persistent and urgent question is, “What are you doing for others”‘. The office, located at the far end of the city on its upper side is detached by a considerable distance from the rest of it. It is small and quiet, flanked by tall, youthful eucalyptus trees and serenaded with music from the chirping of quaint, little birds. This is where most of the thinking that goes into Okere city happens. The interior is cool and the décor, thematically African. On one end of it are shelves with large files pertinent to the activities of Okere city. On the other end are shelves with a wide assortment of books whose titles range from economics, sociology and development, to fiction novels and popular non-fiction titles. Asked whether he has read all the books in his collection, Ojok answers with his ever unassuming smile, “Yes. Most of them.”

The women during a class in the adult school, called “aero-kwan” which translates to “I have embarked on education”

Ojok’s love for reading and passion for learning has transmuted into a school for adult learners in the community. Its attendees, mostly elderly women, are simply excited to be studying again. Many of them belong to a generation whose education was disrupted by the rebel activities of the Lord’s Resistance Army – a local terrorist group led by the International Criminal Court – wanted Joseph Kony, and those of the cattle rustling Karimojong in the neighbouring north-east.

The feeling of accomplishment that they have in being able to greet visitors and to say their names and where they come from in English, is heartwarming. It puts into perspective the importance of the things that we so often take for granted, such as the ability to have an education. Their reasons to want to have an education are simple: to be able to read signposts in the neighbouring large towns, to access social services and to trade widely.

If the mood in Okere City is anything to go by; how it pulsates with life and springs with pomp and enthusiasm, then the concept of Okere City has been bought into by the community. The spirit that binds Okere city is otherworldly. Young men on motorcycles whizz past in youthful pizzazz while the older men, hunched over their bicycles, peddle past a little more slowly but with a matching zest for life. The weekends at Okere which are characterized by a buzz of activity, best capture this mood. On these days, the market is alive with men and women vending their wares; mostly food items that include the meanest roast and deep fried meats, a local brew- maruwa and other snacks.

A group of men enjoying a local brew- maruwa

It is an air of celebration and dance with lots of drink and merrymaking. Music in Okere holds its own forte, with traditional okeme (thumb piano) music owning the day, even though more modern, popular music from the Northern region and the wider Uganda; plus tunes from Nigeria, Ghana, The Democratic Republic of Congo and The USA are also played and equally enjoyed.

Dance and merrymaking at Okere City

This festive scene, the energetic voices of the men as they sing along to the melodies of the okeme, coupled with the sing-song voices of the young women, all fuse into a single melodious harmony that transcends for a moment, the huge odds that Okere city is yet to surmount in its quest to become Africa’s first sustainable rural city.

In the meantime Okere’s birds and animals rise in chorus with their own melody to join that harmony, while its lean eucalyptus trees swing in worshipful sway, to the wind of change sweeping through this community, making Okere city moment after moment, alive to its motto: “Yamo akwo koddo”, which translates to “the living wind blows”

A man and his passenger ride past a large billboard at the entrance to Okere city, with an advert for the village bank. 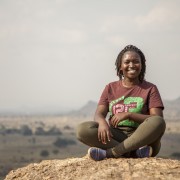