The five bikers you approached smelt of gin and filth. When the sixth man requested for your destination the stench from his mouth knocked you to the earth. Like Christopher, he could have had a jar of the local gin that afternoon. You walked away, disappointed, to a man who sat leaning on a mango tree with his face covered in what looked like a face-cap. You tapped him and he jumped to his feet like he had been prompted to challenge an enemy. You calmed him and explained that you needed his services. He searched his cloth and returned with a key. He turned his ignition and all you heard was a pathetic cough. He gestured for a push and you reluctantly helped. He smelt sane.

Bewildered, you examined the rickety motorbike whose seats seemed inconsiderately chopped by some antagonising spirits. It moved like an old woman but with unlimited smoke. The biker screamed in his native language for you to jump. You grudgingly contemplated. When you delayed, he remarked about your feminine frame. You climbed when the stare increased.

You swallowed a keg of saliva each time his speed doubled. You wished you had prayed, but God had ceased to exist in your life two years ago, when you left the university. The jeer from the born again students killed your faith.

You had to see your mother. Life had been uneasy since you left her. The village would have had you lynched, if you had not sneaked out through her kitchen window. The youths arrived that night for your head. They had caught you with Nwigbo, the carpenter. You held his large work table while he took you to paradise from behind. Your father, whom you hated the most, not for his coldness but closed heart, died a year and a half ago. Three years, painful but worth it, had gone. Transformed, at least physically from working out, you don’t know how your mother would look at you. Wrinkles are heartless; they might have rented her face and given her less attractive smiles, you thought. But smiles, no matter the sadness always come out refined. You wished for her everything good and tried to contain your thoughts.

The path to your community had not changed. Over grown grasses still decorated the way. A few scanty electric poles stood lonely apart, with connecting cables. They were the only change you noticed. Maybe if you cared much, the carpeted coal tar would have mattered. But they were just there, unnoticeable. You tried to feel the rushed wind which poured into your face like a welcome gesture, but you felt uneasy, heavy with words in your head for your mother. Would she scream when she heard of your partnership with Chris? You looked ahead, to endless possibilities.

The man in front of you kept a straight head on the road. The wind made his shirt fatter as he sped. The fat shirt rose like a troubled penis and you smelled his poverty.

The okada reached the junction where you had to point him to your mother’s home. And when he made the turn your mother’s hut was just in front of you. The mud wall had cracks in it. The door hung on one hinge, like a symbol of the wrongness of poverty. Some thatches were displaced. And you saw the window, the same one that saved your miserable life. You stared at the open hole; it was the only source of light that complimented the door’s. You heard nothing. The okada man stretched out a hand for his money, unmindful of your recollections. You found him a piece of the many naira notes in your pocket. He made to go and you screamed at him for the change. He frantically tried to please you with apologies. You collected your money and folded your slightly giant body into the hut. The smell of burnt firewood knocked your large flat nose. You dusted stains from the door off your pink shirt and tried to find a figure in the dark room.

You saw nobody. Not even the lizards you played with when you were a toddler. Then you looked at the fireplace where the smoke had its headquarters. You saw a body next to the fire, befriending the heat. You greeted her lowly, like she was a deity. She made a smile that could be seen in the dark, same as you had imagined. You asked her a billion questions about her health and she ignored them to ask of your education. Slender, her image seemed muddled up with a shadow. When you thought her questions were over she dropped a deafening yet troubled request.

“I want a grandchild, Kenule…”

You heaved, settled on the mat where she lay and unpacked your bag. You dropped a tin of milk, a loaf of bread and some multivitamins by her side. She pushed it away gradually, like an older man adjusting a sleeping child.

Her words concluded like a last wish and you tried to extrapolate. You made to fetch some water from the clay pot blackened by age, but she held back your spirit with a call.

She struggled to hold invisible objects for support, to look at your shaved face and the well trimmed beards while you watched baby fire pick feeble hands and rest on smoking firewood. Each progress of the building fire reminded you of childhood, how you placed maize and pear next to a red coal to make a meal. Then silence ensued. Your mother gave up the attempt to rise. She stayed calm, breathed like a baby. And your mind leapt. You stood up to inquire if it was a goodbye message, but her eyes livened at yours and for the first time since you arrived, the picture of Christopher popped into your head; his lips and how it tasted like peppermint. 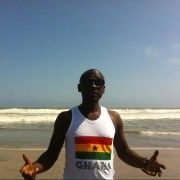