Recently, I jumped on to a late night boda boda from Naalya. All I needed at that time was a quick means of transport to get me to town and a taxi was not an option.

One particular one stopped. He seemed not to be in as much a hurry as I was and yet he was very willing to take me. Off we went.

Reading from the urgency in my voice, be asked me which route I thought would be nearer for me and that began ted talk. I opted for the northern bypass. He had a light hesitation in his voice about using the bypass.

In 2016, Richard was a victim of the then rampant iron bar hit men who left him for dead running off with his recently acquired new boda boda. He was to spend the following six months bedridden selling off his property to foot medical bills.

“The good thing is I had three other boda bodas that the boys were riding. At least I had some income,” he tells me.

The only problem was the landlord. He became less impatient with the piling rent arrears that he, not once, threatened to throw him out of his house. Richard was heartbroken. He thought his previous faithfulness would earn him the Landlord’s trust but to no avail.

Earlier in 2016, he had bought a plot of land in Kakiri, Wakiso. However, his wife was not interested in staying in such a distant “village” as she termed it. She suggested they sell it off and they buy a plot nearer to town where they could build their own house.

Upon recovery, Richard was fed up with the landlord’s reminders that he decided he would build himself a house as soon as he could.

He sold off his Kakiri plot and bought another in Masanafu. It is there that they began construction of their own house which they entered at the beginning of this year.

I could tell from his excitement. “My brother,” he beamed, “there’s nothing as good as staying in your own house.”

His family was happy for him. His mother offered to roof the house while his mother-in-law offered to give them the windows. Not to mention offers from random people.

By this time, we had reached Park Enkadde and parked. Richard’s tale was too good to leave behind. “Don’t fear to do what you want to do.” He kept reminding me. “I didn’t know I could build my own house.”He holds that when you are doing something good, people will always be willing to help. He got help from many other people he never expected. In his parting shot, he told me that he didn’t know even poor people could afford to own their own houses.

***It is stories like Richard’s that will form the conversations at the coming #HousingFinanceForum. 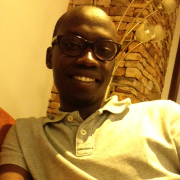 ON EVADING #SOCIALMEDIATAX THROUGH VPNs